The most recent poll of Canadian attitudes towards electric vehicles (EVs) finds that more needs to be done to increase consumer demand.  The key areas of consumer support needed are consumer EV purchase incentives, expanding accessible EV charging infrastructure and educating Canadians on EV benefits to consumers and the environment.

The survey, conducted by Leger for the CVMA and Global Automakers of Canada (GAC), offers insights into the key barriers to consumer adoption of EVs in Canada. The findings are based on an online survey of over 2000 Canadians completed between March 19-27, 2021.

According to the poll, the top reasons Canadians cited for not purchasing an EV are limited driving range (55%), higher purchase price (54%), a lack of public charging infrastructure (47%), and the time required to charge (45%). Concerns with EV inventory at dealerships or a lack of models to suit consumer needs were two of the three least-cited reasons for not purchasing an EV. 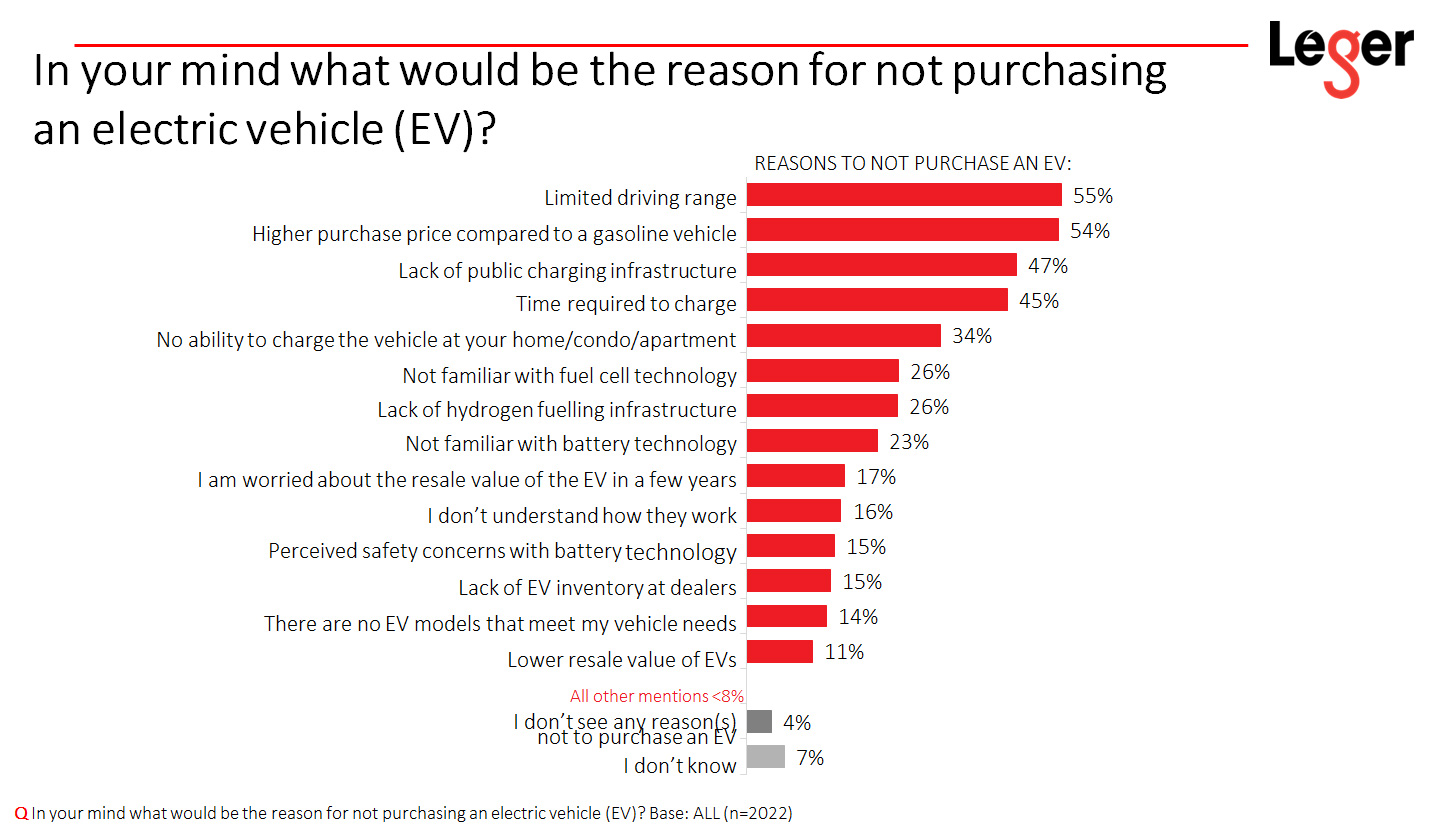 Three-quarters of respondents noted concerns with EV driving ranges and lengthy charging time when travelling. Another 57% do not know where or how to access vehicle charging at their home. Addressing consumer concerns with EV ranges and charging infrastructure will be critical to encouraging more Canadians to make the switch. 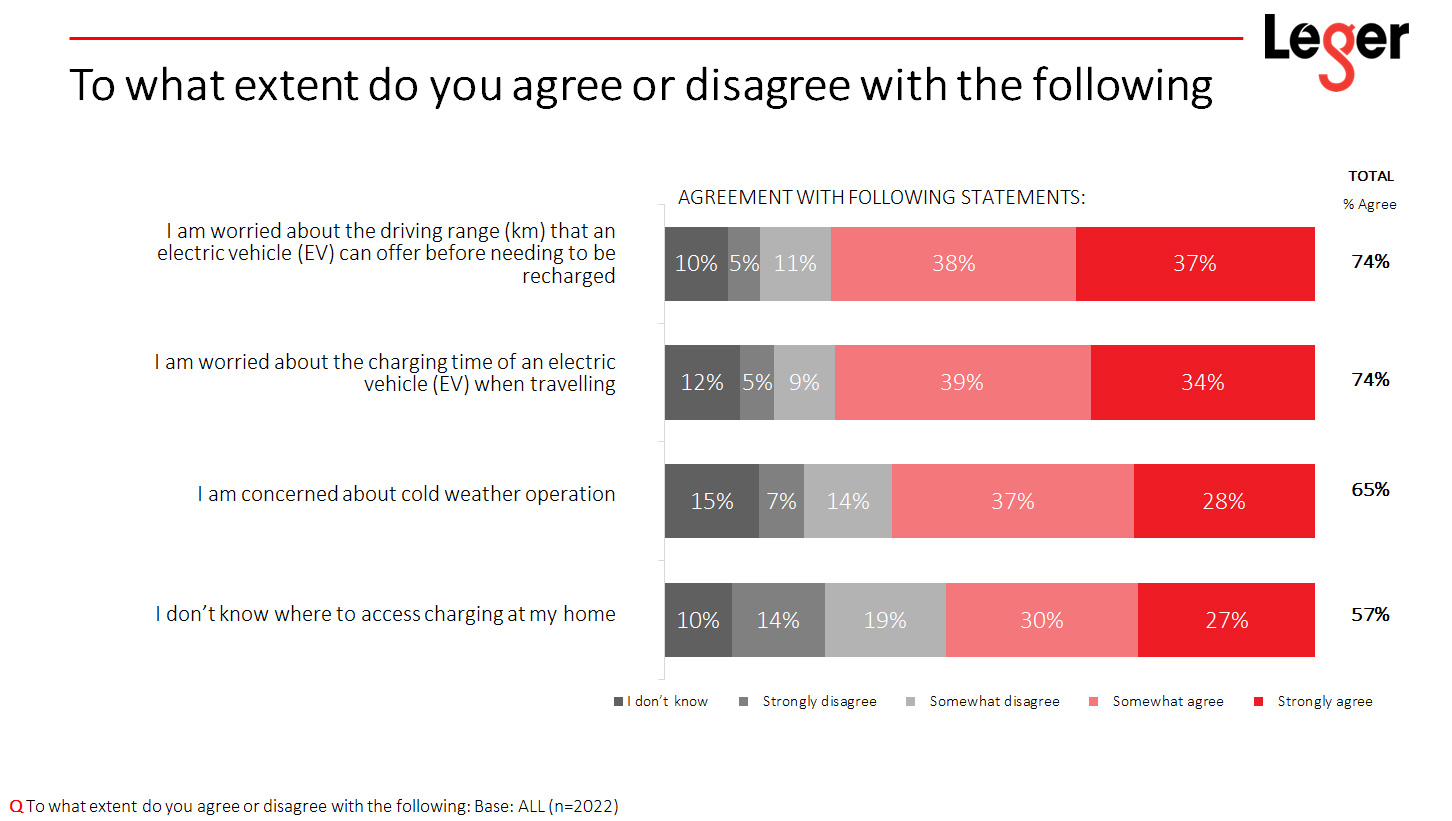 EV consumer education remains a significant barrier to widespread adoption with only two-in-ten Canadian’s feeling they have done sufficient research on EVs. Only 4% of respondents were aware of the number of EVs currently available in Canada (41), and just 38% of consumers are aware that the government has a consumer EV purchase rebate of up to $5,000 available.

An encouraging finding is that there is widespread support for government efforts to help Canadians to purchase EVs. The most popular policies and programs cited include tax (GST/HST) deductions (51%), free access to public charging infrastructure (45%), consumer EV purchase incentives (45%), preferential EV insurance rates (43%) and free annual registrations for EV owners (39%). 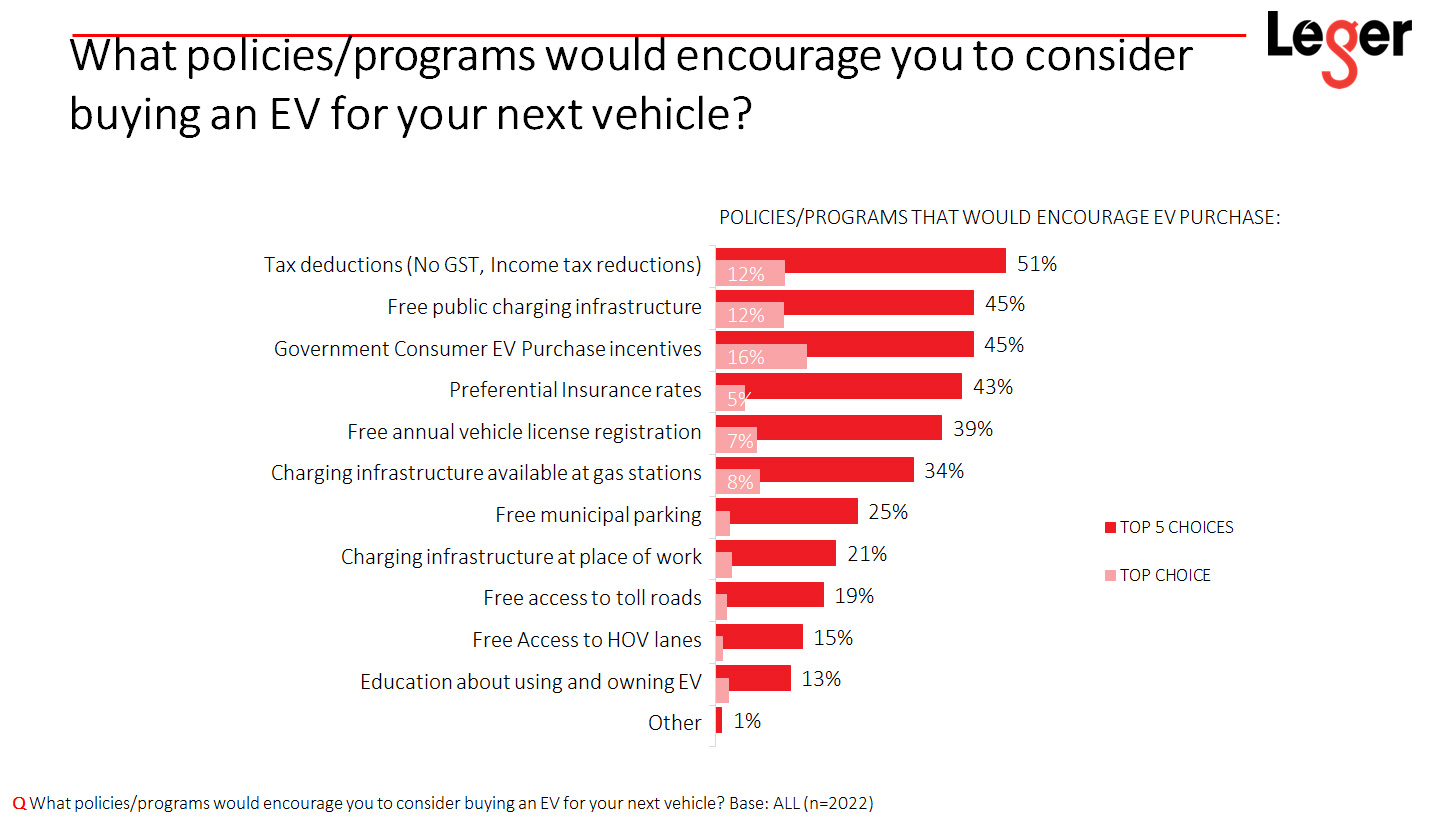 About the Canadian Vehicle Manufacturers’ Association

The Canadian Vehicle Manufacturers’ Association is the industry association that has represented Canada’s leading manufacturers of light and heavy duty motor vehicles for more than 90 years. Its membership includes Ford Motor Company of Canada, Limited, General Motors of Canada Company, and Stellantis (FCA Canada Inc.). Collectively its members operate 4 vehicle assembly plants as well as engine and components plants, and have over 1,300 dealerships. 136,000 jobs are directly tied to vehicle assembly in Canada. Direct and indirect jobs associated with vehicle manufacturing are estimated at over 792,000 across Canada.

About Global Automakers of Canada

Toyota and Honda, respectively the two largest vehicle manufacturers in Canada, are responsible for more than 50% of Canadian light-duty vehicle production in Canada and directly employ more than 12,000 associates in five vehicle assembly plants and one engine plant.

GAC members and their associates employ, directly or indirectly, more than 77,000 Canadians in automotive manufacturing, sales, distribution, parts, service and financing, as well as in head office operations.