The success of Canada’s highly integrated automotive industry which has brought unparalleled economic benefits across the country has been underpinned by the North American Free Trade Agreement (NAFTA).

A negotiated and modern NAFTA must:

The CVMA and its U.S. counterpart, the American Automotive Policy Council (AAPC), along with our respective member companies are all focused on enhancing and improving the competitiveness of the North American region and the important tri-lateral automotive trade relationship within NAFTA.

The North American auto sector is competitive globally when it functions as a highly integrated, seamless single sector within North America.  As a result, our recommendations to Canada for the modernization of NAFTA are aligned with recommendations made by our colleagues in other NAFTA countries.

Much has changed in the global and North American economies in the more than 23 years since NAFTA was first negotiated. The potential opportunity for modernization and improvement exists, while retaining aspects of the agreement that have benefited Canadian vehicle manufacturers, their parts suppliers and their workers.  The benefits of NAFTA are clear and they are significant for automotive and related jobs in each of the NAFTA countries.
The North American auto sector began to integrate into one common sector for the production of automotive vehicles and parts under the 1965 Canada-U.S. Auto Pact, which laid the basis for the subsequent Canada-U.S. Free Trade Agreement (“CAFTA”) and ultimately, NAFTA.  Today, the three NAFTA countries build vehicles seamlessly across the borders resulting in a more competitive North American trade block.  Canada, Mexico and the United States produced more than 17.8 million light vehicles in 2016 and operate in a highly integrated NAFTA light vehicle market of 20 million units.

In more than two decades since the implementation of NAFTA, the North American economy has expanded, with the combined GDP for Canada, the U.S. and Mexico reaching $20.7 trillion in 2015. Canada is dependent on exporting outside of its own borders, with domestic consumption of just 12% of the vehicles it manufactures within its borders. 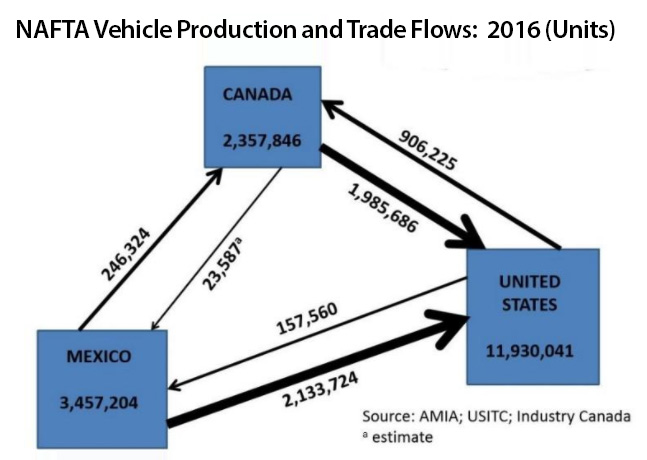 NAFTA provides Canada with duty-free access to the U.S. and Mexican automotive markets.  Parts and components may cross the NAFTA countries’ borders as many as 8 times before being installed in a final assembly plant in one of the 3 partner countries.

Additionally, NAFTA’s current Automotive Annex sets out a framework of trade rules that respects and reflects the deeply integrated and highly efficient supply chain between Mexico, the United States and Canada.

Auto-related trade between Canada and the U.S. is largely balanced given the high level of U.S. content in Canadian assembled vehicles.  In fact, 75% of the value of U.S. automotive parts exports are shipped to NAFTA partners (split roughly evenly between Canada and Mexico; Canada represented the largest export market representing $22 Billion in parts value exported from the U.S.).

NAFTA duty-free access and the associated 62.5 percent minimum regional value content requirement – the highest of any Canadian trade agreement and possibly any trade agreement in the world — promotes the free flow of vehicles and parts across the borders of the three NAFTA partners (U.S., Canada and Mexico). Any changes that are likely to disrupt that established framework will inevitably lead to the reduction of the massive benefits that the integration of the North American automotive sector has afforded the auto industry in the three countries, impairing the sector’s global competitiveness with commensurate losses in high skilled jobs and a stifling of economic growth overall.